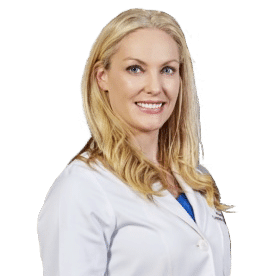 Dr. Laura Rubinate has primarily specialized in Ophthalmology for over 11 years. During her time in the military she performed many refractive surgeries on active duty personnel, including femto LASIK, custom LASIK and PRK, as well as Visian ICL placement.

EDUCATION | TRAINING
Dr. Rubinate is originally from Philadelphia and received her undergraduate degree from Cornell University in Ithaca, NY. She then worked as a scientist at GlaxoSmithKline Pharmaceuticals, while pursuing a graduate degree in Pharmacology from Thomas Jefferson University.

She attended medical school at Nova Southeastern University in Fort Lauderdale, receiving her medical degree in 2008. She then entered the military and completed her transitional internship at Brooke Army Medical Center (BAMC) and Wilford Hall Medical Center (WHMC) in San Antonio, TX as an Active Duty Army officer, followed by her residency in Ophthalmology from 2009-2012. She was then an active duty Army staff physician at William Beaumont Army Medical Center in El Paso, TX and again at BAMC until she was honorably discharged from the Army in 2016. She was then in private practice in San Antonio where she continued to utilize her refractive surgery skills until moving back to Florida in 2019.

MEMBERSHIPS | AFFILIATIONS
Dr. Rubinate is board certified by the American Board of Ophthalmology and licensed by the Florida Board of Osteopathic Medicine.

Schedule Your FREE LASIK Consultation!
Enter your zip code below and we'll match you with our closest location.
This site is registered on wpml.org as a development site.